EVOL is a Euratom project, focussed on the development of a molten salt fast reactor (MSFR). Six European countries cooperate in EVOL: France, Germany, Hungary, Italy, The Netherlands and the United Kingdom. It is a Grenoble/Paris based project, led by the French Elsa Merle-Lucotte. It has some unique features.

Although it will be hard to find any flashy presentation on the internet about what’s going on at EVOL, the French molten salt reactor project that’s carried out in Paris and Grenoble may well be Europe’s trump card in the worldwide molten salt reactor movement. Elsa Merle-Lucotte’s presentation at ThEC13, the Thorium Energy Conference 2013, fits the general impression of a project that is underexposed. Her presentation is not flashy, maybe even modest. But this soft spoken woman and her team are creating no less than a nuclear beast.

Now that may not be a favourable expression to use in the context of the nuclear community, not generally reputed for its flowery use of language. Yet all of its more familiar sounding technical specs like power output (3000MWth), mean fuel salt temperature (750C), flow speed of fuel salt in the core (4,5m3/sec) temperature rise during core passage (100C), total fuel inventory (18m3), just don’t seem to convey what the thing really is: a fire-breathing dragon. But then: a dragon neatly and safely contained in a steel can smaller than 2,5 x 2,5 meters. 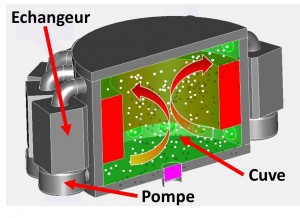 The MSFR’s reactor core – a cauldron full of hot, flowing liquid, surroundes by a wreath of pumps

Before we go through these figures once more, it’s important to notice, like Merle-Lucotte does in her presentation, that we’re talking about a paper reactor here. The team is working on a functional design and what we’re looking at is basically a multitude of calculations, summarized and visualised into a drawing that reminds one of a big cauldron, surrounded by a wreath of pumps. This hardware contains the liquid core of the reactor, and the liquid circulates in a form that reminds one of a doughnut – without a hole. At the place where the doughnut’s hole should be, most of the heat is generated. The circulation pattern is one of the smart things of this design: at the center of the flow, where the nuclear reaction is at its intensest, no structural elements are present, lessening the materials challenges that come with intense radiation and neutron flux. The reactor does not need a moderator and is fast spectrum. Its being fast means, besides a lot of other things, that it has good possibilities for actinide burning. In other words: it can run on the spent nuclear fuel of Pressurized Water Reactors – the type reactors we’ve come to consider as the usual thing.

The dragon (green) in its den – the core of the reactor is surrounded by three barriers, even though this dragon is intrinsically well behaved. The core is quite hot (up to 750C) but not pressurized. A negative temperature coefficent makes this reactor ‘walkaway safe’.

In her presentation, Elsa Merle-Lucotte explains that the team has been carefully looking at historic MSR’s, to determine criteria for safety, intrinsic stability, good breeding properties and a low initial fuel inventory. The choice for the MSFR nicely fits these criteria. One especially important aspect that ensures intrinsic safe operation is the negative temperature coefficient. A negative temperature coefficient means that if for whatever reason the temperature in a reactor starts rising, for instance a failing generator that takes out the secondary cooling, the nuclear reaction slows and soon stops – even if for whatever reason there is no operator present. Apart from that, the reactor also has the safety feature shared by most molten salt reactors: the freeze plug. This plug is essentially a lump of the same salt that’s also in the core, but this one lump is solidified by active cooling: a small electric fan will do the job. The trick is that this fan is powered by the electicity that the reactor produces. If the power fails, the fan stops, the plug melts and the salt simply drains into a subcricital storage tank. This was actually the shut-down procedure at Oak Ridge, in the 1960’s, when the team wanted to go home for the weekend…

A different safety aspect is that in the MSFR, also due to its being fast and its neutronic properties, removal of protactinium – produced in all thorium reactors – is not necessary. Protactinium removal in other thorium reactors may pose a proliferation risk, and even though this risk can be made controllable by other means, the fact that MSFR can do without any protactinium removal will make it more attractive from a licensing point of view.

Now some remarks on what a nuclear reactor is all about: its energy production qualities – and quantities. First, the MSFR will run on an initial fissile inventory of 3 tonnes, a remarkably low figure for a reactor capable of producing 3000MWth. The total weight of the molten salt mixture is 18 tonnes. This melt, half of which is in the reactor, half outside in the pump array, is being pumped around every 4 seconds. In two seconds of upward flow in the reactor, the temperature shoots up with 100C. All this heat, 3000Mw/s of it, is delivered to heat exchangers that will pass on the energy to turbines, that will be able to produce 1500 MWe, an efficiency of roughly 50%, thanks to the high efficiencies that are made possible by the high operating temperature.

In this presentation on ThEC13 of Paul Madden, one of the people working in Elsa’s team, he explains some of the – rather spectacular – thermodynamics of the MSFR>

The following link is to the presentation of Elsa Merle-Lucotte, she describes the progress. http://cds.cern.ch/record/1625815

Here is the pdf of the presentation: