Late 2016, early 2017 it has become clear that TAP has been over-optimistic in claims about its reactor’s ability to burn nuclear waste. This public news has confirmed earlier signals daretothink has received from nuclear insiders. The general message we should take from this is that designing, let alone building molten salt reactors, is no easy job.

A coverage of the background of this announcement can be found here.

Does it still look feasible to have a reactor run on nuclear waste?

It does, but to make the cycle neutronically feasible, the U238 should be removed first. In the summer of 2016, Kirk Sorensen presented his concept for a waste burner for a small audience – in the midst of the summer holidays – in Delft, Netherlands. He calls it the LFTR49.

So the following is now essentially history, kept her for reference reasons

Transatomic Power, established by Leslie Dewan and Mark Massie, is a Cambridge Massachusetts based firm, created around the innovative ideas of an MIT related group that merge in the design of the TAP reactor. In previous presentations, this molten salt reactor was called the WAMSR – but one may suppose that somebody finally decided that an idea needing 2 billion dollar for its realization would be better off without a name that seemed to get straight out of a comic book.

That’s not to say that the name was wrong:  to be called a Waste Annihilating  Molten Salt Reactor made perfectly clear how the WAMSR – excuse me, TAP – is positioned in the United States. That’s a sensible approach: the home of ‘nuclear’ still has ambiguous relations with its heritage, to say the least. To call it ‘Waste Annihilating’ positions the reactor as a green machine. 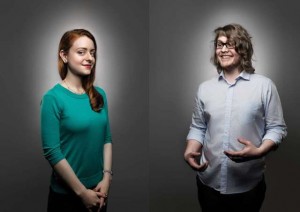 Around the world, 270.000 metric tonnes of nuclear waste is sitting in pools, waiting for ill informed politicians to finally decide on either fuel processing or long term storage. Leslie Dewan and Mark Massie have a better idea: burn it in a new type of reactor, produce virtually no waste and a boatload of energy cheaper than coal.

And here’s a more informal explanation of Transatomic’s plans. In this interview, Leslie Dewan explains that her reactor is able to use 96 per cent of the energy content that is left in spent nuclear fuel. She expects to have a demo model running in 2020 and a commercial scale reactor ready by 2025.

In February 2015, Transatomic announced that it has raised an additional $2.5 million in an oversubscribed round. The new funding comes from Acadia Woods Partners, Peter Thiel’s Founders Fund, and Swiss investor Daniel Aegerter of Armada Investment AG. The round follows the $2 million raised from FF Science, an investment vehicle of Founders Fund, last July. Here’s an article in bizjournals reporting about the new round of funding.

In this article in Popular Science, Leslie Dewan explains Transatomic’s plans in simple terms: have a demonstration reactor built in 2020, and build a complete 520 MW commercial reactor for $1.7 billion­—half the cost of a light-water reactor.

This article on al fin next level shows how the chances that Transatomic will realize their ambition have grown in the course of 2015. Early funding from several sources have resulted in a research budget for TAP that is estimated at $ 6 million. Not nearly enough for the whole program, but definitely a hopeful start for Dewan and Massie!

If you read German, or if you can deal with the clunky translation of Google Translate, here’s an article published on heise.de on 20150223. It features some very interesting updates on Transatomic.

In this 20150908 interview on LinkedIn, Leslie tells she finds herself ‘spending many hours lobbying on Capitol Hill for eased regulations surrounding nuclear energy’. In this Testimony before the U.S. House Committee on Science, Space, and Technology
Energy Subcommittee, Dewan explains how under the present regulatory system, it is virtually impossible to develop a new reactor within the U.S. In recent months, according to some reports, regulatory authorities of the U.S. are showing signs of shifting to a more cooperative stance.

In this Discovery article, Dewan and Massie explain some about their history, and their mid term plans: the present goal is to realise a 5MW demo reactor, to be build at one of the  U.S. national lab sites.