Of course, Nils Bohr’s birth country could not stay behind in the evolving race for the world’s first fluid fuel reactor in fifty years. And it doesn’t: Copenhagen Atomics made its entry in the molten salt movement with a fresh concept: the Wasteburner. If you’re eager about seeking out new and ingenious reactor concept: allas, Copenhagen Atomics proposes to stick to the MSRE concept that has proven to work just fine in the 1960s.

Nevertheless, CA’s concept is quite innovative in several ways: it focusses on burning nuclear waste, proposes a detailed scheme for chemical processing of disposed cladded fuel pellets from LWR’s, and has some quite fresh ideas about financing the endeavor.

A reactor to clean up the stuff that present reactors leave behind and turn it into megawatts, fresh new fuel, precious metals and euro’s

The targetted fuel for the Wasteburner is spent nuclear fuel (SNF) from LWR’s, after it has been stored in cooling pools for at least a decade. After decladding, the rods are chopped and processed by several chemical processes, of which fluorination is the most important. Essentially, the rods are separated into three fractions. The largest portion is uranium, which, after purification, is still slightly enriched and can be used as fresh nuclear fuel. About three per cent of the SNF consists of stable fission products. These are ligther elements, created by the fission process. They are not really a problem, but to lose their radioactivity, they do need storage for about 300  years. The last and smallest fraction are the tansuranics, of which the most well known is plutonium. The transuranics are considered as the biggest waste problem created by LWR’s. It’s these transuranics that can be burned in the Wasteburner. 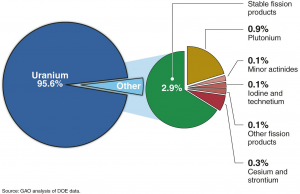 After a fuel rod has been in a Light Water Reactor (LWR) for, say, 40 months, the fuel becomes too contaminated with fission products and transuranics and it has to be removed. This picture shows how the fuel rods that come out are composed. It’s mainly fresh uranium, but a small fraction spoils the party. The Wasteburner intends to burn the small portion of fractions to the right.

No flashy new core, just a pile of containers

Different from other startups, Copenhagen Atomics refrains from presenting a flashy design for a novel reactor core. Instead, they present the image of a pile of shipping containers, stacked beneath ground level. It’s coverd by a reassuringly big, removable block of concrete. In their whitepaper, CA admits that the core design does not differ much from that of Flibe Energy or Transatomic. Like these, the Wasteburner is a thermal reactor – meaning it uses slow or ‘thermal’ neutrons, rather than the fast neutrons that come straight out of the fission reaction. Common wisdom has it that a fast reactor – a reactor that does use the fast neutrons that come straight out of the fission reaction, without being ‘moderated’ – is the better option for nuclear waste burning. This common wisdom does not really apply to molten salt reactors: a molten salt reactor keeps its fuel in mint condition and therefore, the fuel can stay in the reactor for many years – long enough to burn all transuranic waste like plutonium, neptunium and ameritium. It is possible to build fast molten salt reactors, but their being fast is considered to be an extra hurdle in the allowance process. 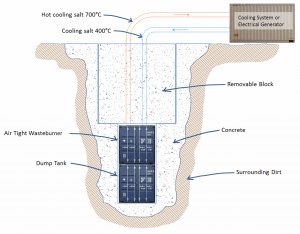 Copenhagen Atomics features the first molten salt reactor that’s presented as a pile of shipping containers. A pile with a couple of pipes coming out: one with the hot cooling salt that goes to either the generator or the secondary cooling system (the latter suggesting a setup purely for wasteburning), the other is the return pipe for the liquid cooling salt. Beneath the ground, the upper container holds the reactor, the lower container the safetey dump tank. In another drawing, we see a third pipe that’s meant for dispersing the heat in case the molen salt drains into the dump tank

As for the chemical part: the molten salt is processed by a novel process invented by Copenhagen Atomics that fluorinates most of the plutonium which is recycled with uranium and neptunium, and separated from volatile fission products through consecutive sodium fluoride traps. This is followed by liquid bismuth extraction which removes and recycles actinides and separates lanthanides.

A financial plan to be noted

One of the most striking aspects of this reactor proposal, however, its unorthodox finance scheme and the cost analysis it includes. On their website, CA explains that the people developing it, work for free or with little payment. In return, they receive shares that will or will not become valuable – depending on whether the company will succeed in realizing its goal.

The public is also invited to participate. Thomas Jam Pedersen and his team propose a simple scheme:  Support us with a monthly payment, in return we promise that everything we build with this money will be open sourced.

In the whitepaper published on the website, the company displays some interesting views on cost structure. The first of their points is well known: capital cost for this type of development with long lead times and uncertain returns will soon dominate the overall cost structure. Another concern is relevant to all startups in this field: the looming cost of monopoly. There are many key technologies and materials in the msr field, and if players succeed in becoming a gatekeeper for key technologies, it poses a very real risk for the further development. CA can only warn for this effect, a question however is what can be done to prevent this development.

It’s interesting that CA also mentions the cost of public uncertainty. It reminds us that large sections of the public are afraid of nuclear energy. “There is the small potential risk that the Wasteburner can become subject to negative public debate.” This risk is taken up as a potential cost driver. All startups would do well to listen to this message. However, with this concern in mind, CA takes a route that may turn out to be a wise choice: involve the public in your development. For this reason, I was tempted to call the Wasteburner ‘The People’s Reactor’ in my headline. I didn’t: it would be possible that readers might think I was being ironic. Let’s just keep it in mind and see if it will come in handy one day…