The essence of why nuclear energy offers such a remarkable perspective has often been illustrated by a hand that presents you a metal ball the size of a golf ball. Kirk Sorensen was the first to make this image go viral, and you’re probably looking at his hand here, holding thies piece of metal.

The claim is that this ball of metal represents the energy you would need for a lifetime of western style living, provided one produces this energy by using thorium in ‘the right reactor’. However, from our page ‘one tonne of heavy metal equals one gigawattyear’, we know that it doesn’t matter much which fissionable metal you use here. So we might as well rephrase the question to ‘how big is that heavy metal ball’?

I don’t know who was actually the first to present this ball. I first saw it in Kirk Sorensen’s youtube presentations, but it may have been Gorden MacDowell who mixed in the picture. According to some, it was Robert Hargraves who first used it. In December 2017, I saw Thomas Jam Pedersen use it in a life Meet&Greet presentation, in Delft, Netherlands.

In this TED talk on thorium energy, Pedersen hits the ball at 2:05. 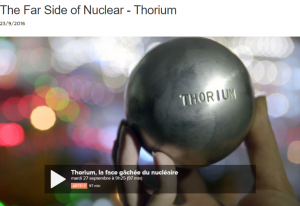 But if you’ve seen this thorium ball for the 653d time, you may start wondering what exactly the ball summarizes. And what size it should be – apparently, there are different opinions here.

Does it supply all the energy needed to sustain the life you live? Does it include your yearly trip to the Bahama’s? Your kilometers made for commuting? Or just the electricity to last you a lifetime? It looks so small.

Fortunately, we have David MacKays great calculations of what we actually use. A handy number is the consumption of 195 kWh’s per person per day: the amount of energy used by the average affluent person, including household electricity, heating, transportation, food, energy contained in the ‘stuff’ we buy: everything that fits our western lifestyle.

On my screen, Sorensen’s hand measures 7,5 cm, and the ball 2,3 cm. If I compare this to my own hand (11 cm wide), the ball should be slightly bigger, about one third in the case of Thorium (the slightly less dense and bigger ball of the two).

But although slightly bigger, it’s still perfectly possible to hold the energy for a lifetime in the palm of your hand, if this energy is produced in a molten salt reactor.

Let’s try that with coal. To produce 1GWe-yr, one needs 3,3 million tonnes of coal. A ball of coal with that mass would have a diameter of 191,3 meters. To transport this amount of coal, one would need 568 kilometers of standard hopper train cars. The energy for you lifetime could be transported in 370 meters of those same train cars. If you would make a ball out of your lifetime supply of coal, the ball would have a diameter of 16,6 meters.

I admit, these calculations cut a few corners on conversion losses. But the size of the balls give you pretty accurate idea of how coal and molten salt reactors compare: the energy contained in a 16 meters ball of coal equals that of a thorium or uranium ball of less than 5 centimeters.

On our way back to Delft, after meeting MSR specialists at NRG, Petten, Netherlands, I had a conversation with Thomas Jam Pedersen about what size the ball should be. I confided that I thought that TJP’s thorium ball was a bit too small. But TJP said he was quite sure – several of his team members had been making calculations, and this was the size they found.

I went over my calculations again – and realized I had made a mistake. In my calculation, I had used the grams to kWh ratio for electric power, where MacKay provides his number (195kWh per person per day) for thermal power.

This means my thorium balls are … too BIG! The weights should be divided by about 2,5…

And Tonelotto’s ball is far bigger than mine ever where…

It looks like Thomas Jam Pederson and the folks from Copenhagen Atomics are closest to the right size.

Previous Numbers page: How long will our supplies of thorium and/or uranium last?