In the previous page we saw that with one tonne of either uranium or thorium, we can produce a gigawatt year of electricity (1GWye), the amount you’ll need to power a modern city with a million inhabitants for a year.

At the time of this writing (2014) the world population uses roughly 2000 GWye. From this figure only, it is easy to see that not everybody has the standard of living of a modern western city. If that were the case, assuming a world population of 7 billion, we would need another 5000 GWye. This is for electricity only.

With our previous calculations, it is easy to see that for these levels of electricity production, we would need 2000 tonnes of U and/or Th for the present situation, and 7000 tonnes for a world population with modern standards of living. How much is 2000 and 7000 tonnes? On this (Dutch, sorry, use google translate…) website, you can read that the average dry payload of a modern barge is 2600 tonnes. 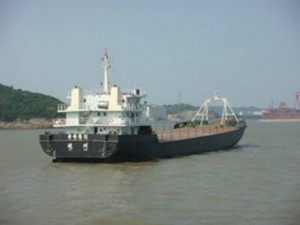 That means this 3000T barge can easily carry the fuel needed to produce the electricity for the present world population for a year. If all 7 billion people live according to modern standards, you’ll need three of those.

For future consumption of energy, we have not quite finished our calculations. First, the population is expected to grow further, according to the United Nations [source] there will be 10 billion of us. By now, we know what this means: we’ll need another barge: four in total.

But wait, we’re not quite there yet! Electricity is only a part of the energy we use. What if we would produce all of the energy with molten salt reactors?* To get an idea, look at David MacKay’s production column on page 103 of his book.

It adds up all the energy we use: 195 kWh per day per person. We can roughly split the column in parts that are delivered in the form of electricity and in more crude forms like coal, oil and gas. With a broad margin, a quarter of the energy is used for electricity. If, for the remaining three quarters, synthetic fuel could be produced with 50 per cent of efficiency, we would need 10.000 tonnes (for electricity) + 60.000 tonnes (at 50% efficiency, six times the quantity needed for electricity) = 70.000 tonnes or 27 barges. If you think that’s a lot of barges (it is, if you’d see them passing if you ride your bike along the Rhine, which is a pleasant thing to do) you have to remind yourself that in those 27 ships is the entire energy need of a world population 10 billion, living according to British standards of living, in the year 2009. It will take a lot of Photoshop work to copy and paste together all the coal mountains, gas bubble’s and oil tankers delivering this amount of energy.

*This is not as strange as it may sound: molten salt reactors are very good in producing heat, which can be used for production of synthetic fuel. Carbon free hydrazine is a good candidate: it behaves roughly as well as Diesel. And it can be mixed with water for use in cars and the like with a very high efficiency.