The Liquid Fluoride Thorium Reactor, or LFTR (pronounced lifter) in short, is the first reactor in history to have its own internet based fan club. It also has an appealing history of origination, a history that deserves to be fully told in a book one day. The direct precursor of the LFTR concept is the Molten Salt Reactor that ran at Oak Ridge National Laboratory from 1965 to 1969. This historical molten salt reactor ran smoothly for the equivalent of 1,5 year of full power production. The MSR that ran in Oak Ridge had a simple design: its core consisted of a vessel of hot liquid, fuelled by nuclear reaction within the liquid. The produced heat is transported through a heat exchanger through which a coolant flows. In Oak Ridge, the heat was simply blown into the air. The picture of the secondary cooling shows what this looks like: 8MW of heat oozing out. 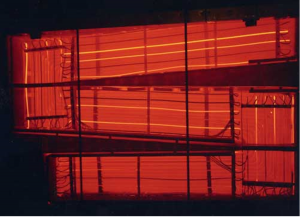 One of the charming details of the Oak Ridge reactor was its easy-to-comprehend emergency shut-down procedure. This procedure was based on the melting of a so called ‘freeze plug’. This freeze plug is a plug of solidified fuel salt that needs to be actively cooled in order to remain solidified. In Oak Ridge this cooling job was performed by a small blower. If, for whatever reason, the power fails, the blower will stop, the plug will melt and all fuel will safely drain into a subcritical storage tank. Gravity does the job. The procedure was so convenient that the personnel used it on Fridays to shut the reactor down for the weekend so everybody could go home. In Oak Ridge, the Monday routine became to re-heat the nuclear soup, pump it back into the core and the reactor would be back in business. The future LFTR adds an extra structure to the design the Oak Ridge MSR: a separate layer of molten salt that is ‘wrapped’ around the core. This special layer of molten salt contains thorium, which is there with the purpose of breeding fuel. The thorium catches a neutron that is produced in the core, becomes protactinium, which decays into U233 which is fissionable: the thorium has become a fuel. The LFTR, in contrast, uses about 99 per cent of the energy content of its fuel. This, combined with the fact of the relative abundance of thorium in the earth’s crust, is the main reason that the claim that LFTR’s can provide affordable energy for the whole planet for hundreds of thousands of years. So it’s not really surprising that LFRT became the focal point of a growing fan base of unorthodox enthusiast that definitely define themselves as ‘green’.
Here’s a nice short remix of many of Kirk Sorensen’s presentation into a compilation: LFTR in 5 minutes: