I don’t know if this is the right expression here, but this argument could be called ‘undead’. In other words, it’s dead, but still walking around on the internet

It’s baloney, a mythconception – not worth my time writing an article about it.

But it’s a good reason to look at page 169 of David MacKay’s great book Systainable Energy without the Hot Air. MacKay can be regarded as an unsuspected source: he has declared ‘I’m not pro-nuclear, I’m only pro-math’. MacKay only needs about 20 lines – and a calculation – to show that, all steel an concrete needed to construct a nuclear power plant included, a nuclear powerplant has a contribution to carbon intensity of 1,4 grams/kWh. Much smaller than the fossil fuel benchmark of 400 grams/kWh. 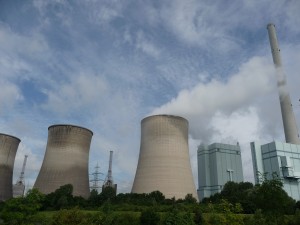 A nuclear powerplant has a contribution to carbon intensity of 1,4 grams/kWh. Much smaller than the fossil fuel benchmark of 400 grams/kWh. This means the ‘carbon calculation’ for a nuclear power plant is pretty good. For a molten salt reactor, it will be 60 to 100 times better.

If you think the title argument of this page needs a lengthier disproof, this refutal might interest you. It’s recently been published on energyrealityproject.