This is an interesting objection, containing an unfortunate high dose level of ‘it depends’.

With apologies to my English-only readers, here’s a link to an article in Dutch that describes the present difficult economic situation for many nuclear power plants, and especially for the new ones that are still to be build. The paper in which it is published is, in the Netherlands, well known for its balanced articles. And it describes the nuclear industry as, well, as disappearing, because nuclear energy cannot compete at the present market prices. Why is this the case?

First, we chose for a reactor that is not really optimized for its goal: producing energy

There is an interesting history to be told about why we have chosen, in the 50s and 60s of the last century, for a type of nuclear reactor that was originally build for use in a submarine and in no way optimal for use as a power production unit on land. These reactors are called Pressurized Water Reactors (PWR’s), or, more general, Light Water Reactors (LWR’s) – the vast majority of the present day reactors are of this type. This choice, although understandable if you look at the history, is by many considered a historical mistake. In fact, the inventor of the PWR, Alvin Weinberg, would later oppose to the further deployment of his own invention, because he was quite aware this was not an optimal design for its purpose. Many of the present day issues of nuclear power plant have emerged from this choice. Most notorious is its fuel efficiency. PWR’s in their present form use less than 1% of the energy content contained in the natural uranium. The remaining 99% of the fuel consists of the unchanged non-fissionable isotope of the uranium, partly transmuted products, usually referred to as ‘waste’, that should be disposed of and/or guarded for endless periods of time, adding to the cost. 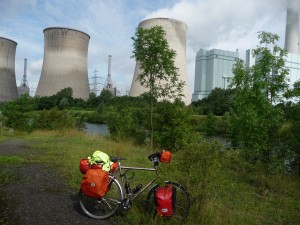 The remarkable thing is that, given the very suboptimal choice for Light Water Reactors as the engine for power plants, nuclear energy is still here. Even though they use less than one per cent of the fuel content of the natural uranium, that single per cent produces about two million times more energy per reaction than does a carbon atom that bonds with an oxygen molecule. Molten salt reactors will be able to use 99 per cent of the energy content of either uranium or thorium.

… redesigned them every time we build one…

Second, engineers of nuclear power plants have adopted, for decades, the remarkable habbit of designing a completely new power plant every time they build one. This has significantly added to the construction and licencing cost. Here’s a nice article in Forbes that describes this remarkable state of affairs. The author, pleads for more coherent planning if we move to Gen III and Gen IV power plants. I present it here, even if I don’t agree to the author not mentioning molten salt reactors as the single standard for Gen IV – an option that I think will make complete sense.

The third reason that present day nuclear energy is struggling to remain competitive is a rather odd one. If you read the book of Wade Allison, discussed on various other places in this website, you will find that the present day standards for radiation exposure are a relic of a time in which scientists had no idea how dangerous low dose radiation was – or was not. In order to have at least some standard in this uncertain state of affairs, the rule was stated that radiation exposure should be ‘as low as reasonably achievable’ – Alara in short. Essentially, it’s a rule that continually evolves, because ‘what is reasonably achievable’ changes all the time, because our technological skills grow all the time. Historically, this meant that the cost of measures that are supposed to protect us from radiation has gone up and up and up over the years.

As we can learn from Wade Allison and many other radiation experts, the standards for safe exposure to low dose radiation can be raised by at a factor 1000 – with a large safety margin included.

In blogs and fora you can easily detect the most vehement oposition against this adaptation of standards to actual insights. This comes from people who work for or own the companies earning billions of dollars on protection measures and storage of radiotoxic waste. Even if the stuff they’re protecting us from is totally harmless. In short, ‘alara’ has been a terrific cost driver for nuclear power.

…but are still standing

So here’s the present situation. Nuclear power in its present form, produced by LWR’s, use less than half a per cent of the energy content of the uranium, transform the remaining 99 per cent in stuff that is expensive to either reprocess or store, are burdened with ever- costlier measures to protect the rest of the world from radiation at ultra low dose levels that are proven to be totally harmless – but is still selling its power.

And molten salt reactors will radically change the equation

Now take the perspective of molten salt reactors. In their page on Economics, Thorcon Power, a US company with the ambition, the plans and the money to rapidly deploy a molten salt based powerplant, presents a clear perspective for the economics of their business case.

Thorcon’s confidence is no surprise to anyone familiar with the MSR’s: they’re able to use 99% of the energy content of the uranium – their fuel cost per kWh will be negligible. They don’t produce nasty, long lasting waste – or they simply consume it in their next operating cycle. They operate at near atmospheric pressure, do not need super-reinforced contaiment buildings and will be much cheaper to build. They’ll come in modular units, adding efficiency benifits to the production proces. It’s just as Robert Hargraves explained in his book: molten salt reactors will produce energy cheaper than coal
Here’s a link to his book. Here’s a link to his facebookpage.

And here’s a video by Gordon McDowell, of Robert Hargraves presentation at the Thorium Energy Conference, Shanghai, 2012: