Early in the 2000s, a young man called Kirk Sorensen, just after finishing grad school, worked with a group at NASA that did advanced technology work. Sorensen’s assignment was to look for an energy source that would be suitable to power a moon base. In later interviews, Sorensen tells he’d read a book on advanced nuclear reactors, when, in the office of one of his colleagues, he discovered a book on molten salt reactors. The book was about the experiments that had been carried out in Oak Ridge, United States, from the mid 50s well into the early 80s of the last century. 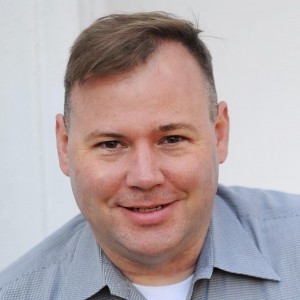 Sorensen was amazed. He’d never heard of molten salt reactors. His find was the start of further studies, that would eventually lead him to the conclusion that thorium, utilized in a molten salt reactor, could effectively solve the world’s energy requirements.
Here’s an interview with Sorensen.

From the time of his (re)discovery, Sorensen has remained firmly convinced that his thorium reactor, fully named liquid fluoride thorium reactor, is short lftr (pronounced ‘lifter’), is the ultimate in clean, safe and abundant energy. 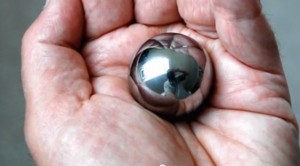 A picture by Kirk Sorensen that has become iconic to the molten salt reactor movement. ‘The energy for your lifetime, contained in a metal ball the size of a marble. Daretothink checked Sorensen’s calculations, they’re pretty accurate. For a discussion of the underlying numbers, please check the number’s page: How big is the ball?

Sorensen has a point. A lftr in its full form will be a superb energy machine. This machine can burns thorium and may do so with 99% efficiency. This means a lftr-powered electricity plant will deliver a year of electricity for a western city of a million, with one single tonne (1000kgs) thorium. The resulting ‘waste’ can be worked up as precious (rare earth) metals or can simply be stored for about 500 years – nothing compared to a regular nuclear power plant. The Earth has plenty of thorium, enough to last us for tens of thousands of years.

This thorium reactor is very safe: the core consists of a vessel of a molten salt mixture at high temperature (650C) at nearly atmospheric pressure. There’s simply nothing that can explode, and the smart design makes sure that if anything goes wrong, the machine shuts itself down without human interference. In case of any malfunction, the hot melt drains away safely into passively cooled drainage tanks.

…may well be the ultimate in its class

A complete lftr consists of two basic parts. One is the vessel with the liquid fuel, where the nuclear reaction takes place. This part has been tested in Oak Ridge between 1965 and 1969. The machine ran flawlessly for 4,5 years and the researchers involved considered these experiments as very successful. However, federal politics decided to discontinue the experiments after 1969 – a decision that was totally incomprehensible to the researchers involved. (The history of the experiments and the motivation for their discontinuation are more fully explained on this page.)

The second part of a complete lftr has not yet been tested. This second part consists of an extra layer of fluid, called the ‘blanket’ that will be wrapped around the core. Fresh natural thorium, in the form of a fluoride salt, is introduced to this outer layer. That is because thorium itself will not fission, it will not ‘burn’. Thorium is not fissile, but it is what is called ‘fertile’. This means if thorium catches a neutron (a particle that is produced in the nuclear reaction that takes place in the central vessel, the ‘core’) the thorium starts to transform into an isotope that cán fission. That is one of the reasons why thorium is so great as a nuclear fuel. Natural thorium is safe and easy to handle: it’s actually less radioactive than a banana. After catching a neutron and becoming a fissile isotope, thorium becomes a very good nuclear fuel – even better than the uranium that we use in regular nuclear power plants. That’s because this thorium-based fuel produces more neutrons while fissioning. More neutrons means better nuclear burning: with thorium, the burning is so good that you can mix in the nasty leftovers from the fuel of present day reactors: instead storing them for 10.000s of years in expensive deposits, a lftr just burns this liability, and transforms it into an asset: valuable energy.

Here’s a nice overview of thorium’s benefits in a three minute item from Russia today (don’t worry, it’s in English)

Here’s a recording of a TED talk by Kirk Sorensen, in which he explains some of the history and specifics of thorium. Gordon McDowell comments: “Kirk Sorensen stumbled across thorium while doing research on how to power a lunar community. Thorium is a cleaner, safer, and more abundant nuclear fuel—one that Kirk believes will revolutionize how we produce our energy.”

Sorensen’s inspiration has proved to be contageous. His thorium vision has not only raised the first internet based fan community, it also inspired Eric Meyer to write and sing what is probably the first thorium aria ever…

But some say we should start with a more ‘doable’ concept

However, shortly after Sorensen’s rediscovery of the thorium reactor, other engineers also started looking at the Oak Ridge documents. And soon found out that in order to have a great energy machine, you don’t really have to build a complete lftr. In fact, there’s a multitude of options to build molten salt reactors that are almost as good, or even as good as a lftr, but may be easier to build and – no less important – easier to licence.

This may be called the more pragmatic approach to molten salt reactors. This position comes down to ‘once the first molten salt reactors in half a century actually run and everybody can see their safety and benefits, we’ll have all the time in the world to build full and complete lftr’s.