On June 4th, 2015 Stephen Tindale announced that he started working for the Alvin Weinberg Foundation, the UK’s first charity to promote nuclear power as an essential part of any carbon free energy future. Tindale is noted for his U-turn on nuclear power. Along with three other persons who have been involved with the environmental movement, Chris Smith, Mark Lynas and Chris Goodall, he has been lobbying in favour of nuclear power and does so now as part of the AWF. 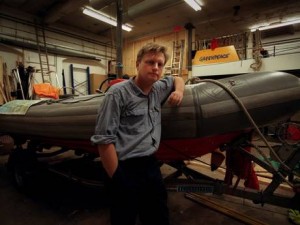 Tindale: “Alvin Weinberg was not only a world-renowned nuclear scientist, but also one of the world’s first climate campaigners. He warned of the dangers of increased carbon dioxide concentrations in the 1970s; over a decade before James Hansen’s historic Congressional evidence in 1988.”

On AWF’s website Tindale states: “I am a former renewable energy utopian – though, since I live in the UK, I am more excited about wind power than I am about solar. I spent 20 years campaigning against nuclear, the last 5 of them as head of Greenpeace UK. I protested outside nuclear power stations. Then I realised that I had been wrong; that renewable energy cannot expand quickly enough to phase out fossil fuels and protect the climate. I concluded that opposition to nuclear power is not compatible with any attempt to control climate change. And, because many of my former colleagues in green groups were continuing with anti-nuclear campaigns, I too felt that it was important to object. So for the last 6 years I have been speaking out in favour of nuclear power, and was delighted last month to start working for the Alvin Weinberg Foundation.”