Stewart Brand, the father of modern environmentalism, now says about nuclear energy that environmentalists made a mistake in the 60s, demonizing something they didn’t understand. He has turned 180 degrees and now calls nuclear power clean green energy.

He wrote an article called “Environmental Heresies” in the May 2005 issue of the MIT Technology Review, in which he describes what he considers necessary changes to environmentalism. He suggested among other things that environmentalists embrace nuclear power and genetically modified organisms as technologies with more promise than risk. 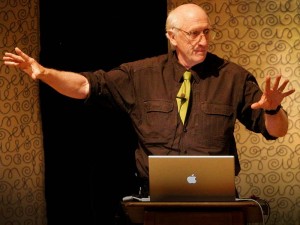 Steward Brand: “There are a great many more environmental romantics than there are scientists. That’s fortunate, since their inspiration means that most people in developed socie­ties see themselves as environmentalists. But it also means that scientific perceptions are always a minority view, easily ignored, suppressed, or demonized if they don’t fit the consensus story line.” According to Brand one of these ‘easily ignored, suppressed, or demonized’ issues is nuclear energy.

In a later TED talk in 2009, Steward Brand repeated this message forcefully: “So, between coal and nuclear, compare their waste products. If all of the electricity you used in your lifetime was nuclear, the amount of waste that would be added up would fit in a Coke can. Whereas a coal-burning plant, a normal one gigawatt coal plant, burns 80 rail cars of coal a day, each car having 100 tons.”

He also has some clear headed things to say about what nuclear power means to nuclear proliferation: “In terms of proliferation, nuclear energy has done more to dismantle nuclear weapons than any other activity. And that’s why 10 percent of the electricity in this room, 20 percent of electricity in this room is probably nuclear. Half of that is coming from dismantled warheads from Russia, soon to be joined by our dismantled warheads. And so I would like to see the GNEP program, that was developed in the Bush administration, go forward aggressively. And I was glad to see that president Obama supported the nuclear fuel bank strategy when he spoke in Prague the other week…”