At the age of 14, he built a working fusion reactor in his parent’s garage. According to some, a kid a smart as Taylor Wilson comes by only once in a generation. At age 21, he has a new plan: build molten small molten salt reactors in a factory and deliver the world cheap and safe power.

Of course, he’s neither the only one nor the first on the planet with such a plan. But he may very well be the only 21-year-old with the talents and knowledge to do it and with the ambition to see it through. He’s been interviewed by the Guardian in June 2015.

In February 2013 he gave a TED talk in which he announced his plan. 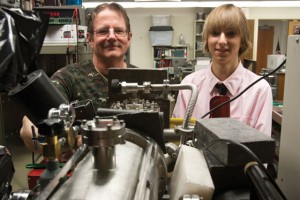 Taylor Wilson and one of his “nuclear mentors,” Bill Brinsmead, in Wilson’s basement lab at the University of Nevada in Reno.

For your convenience, I’ve included the transcript here. I like especially the part that starts at 9:29, where he explains his love for space travel and how a molten salt reactor would be the dream of any space traveler, especially if you would not only say travel to Mars, but would also want to have power there for the first 30 years. An msr would do the job!