For anyone trying to outline a future of sustainable energy, my urgent advice is to read David MacKay’s wonderful ‘Sustainable Energy – without the hot air’. Bill Gates has called it ‘one of the best books on energy that has been written‘. In case you have not yet read it: David MacKay explicitly declares that he is not pro-solar or pro-wind or pro-nuclear. David MacKay is pro-arithmatic. His only ethical demand is to come with a plan that adds up. It’s also a very well written, even entertaining book, with a plentiful dose of British humour. And because it’s so focused on helping you to calculate in a simple way, the information is still completely relevant, even though the book was originally published in 2009. Just read it. It’s available for free, on the internet.

In chapter 25, MacKay calculates how much landspace we would need for providing a billion people with an average daily power supply of 125 kWh. The answer is a square of 600 x 600 kilometers, roughly the size of Germany*). But we’ll not have a billion people around in a few decades, we’ll have about 10 billion. That means 10 Germany’s of desert, filled with photovoltaics. 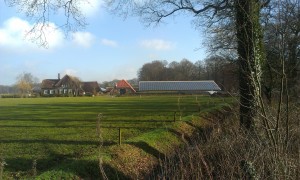 Using available space to install PV panels for a company can work out fine, like it does for this farmer. I had the privilage to visit this cattle farm. Despite its rustic appearance – apart from the solar panels on the barn where the cows live – this farm uses very modern equipment like a milk robot, that is powered by PV. However, installing panels for a prosperous planet requires roughly ten Germany’s, as David MacKay’s calculations demonstrate.

The question is not only if that would be physically possible. It might be, although the amount of land and infrastructure needed for the panels, their maintenance and the transport of the electricity is staggering. Also, people who have lived in deserts point out that sandstorms in deserts are not a trivial issue for this type of plan. Another thing is that from the standpoint of strategic independence, having your energy supply in – say West Saharan, Lybian, Algerian or Egyptian deserts would not have left us feeling overly comfortable, over the last decade.

With apologies to my English-only readers – this link is to an article in Dutch, written by a pro-solar writer, to be regarded as a reliable source where it concerns the more problematic aspects of solar – I’d like to pick out some of the arguments used in a 2014 article in ‘Trouw’, reputed for its balanced view on energy subjects. In point 9, the author explains that ‘If one single solar plant in the Sahara Desert were to supply energy for the world demand, it would have a surface of a million square kilometers’. That’s roughly three Germany’s. That implies the figure must be pretty accurate for our present energy consumption – compare them to MacKay’s figures in the second paragraph. However, the figure does not take into account the expected growth of the worldwide energy consumption. But one of the main lines of reasoning in the article is that for the time being, it is better to produce solar energy locally, at the place where it is consumed. Large scale solar plants, including transport over hundreds or thousands of kilometers, weighs heavily on the cost per kWh.

For wind, similar remarks can be made. The extensive windparks that are being planned now would be dwarfed by the ocean spaces needed for energy in the amounts we speak of here. Deep ocean wind parks require long distances be covered for transportation, resulting in energy losses.

While all intermittent energy sources require grid sized storage, which is presently unavailable. Any form of storage, like pumped hydro, significantly adds to the cost.

Even if wind and solar could supply 50% of electricity production, you’d need another 50%

There’s another, more technical argument against hoping that one day we may power the planet with wind and solar. This argument has to do with a fundamentel property of ‘the grid’ (the whole of the electricity network), that dictates that at each point in time, energy production and energy supply have to be balanced. Wind and solar are not load-following, they are weather-and light-following. This issue is well known, and usually the ‘smart grid’ is proposed as the solution, together with the plan to cover wide area’s of wind and solar parks across the globe, so that ‘there’s always production somewhere’.

A smart grid is supposed to balance supply and demand intelligently. According to Ben Heard, the cost of this solution will not allow for a larger share of renewables than 20 to 30 per cent.

As MacKay also explains, even in this sceneario, we will still need extensive buffering with grid-sized buffers like pumped storage or whole countries full of car batteries. However, experts in this field like the Australian Ben Heard have looked into the very complex issue of how this type of infrastructure impacts the cost of power production. Ben Heard’s best estimation yet is that a solar/wind share of 20 to 30 per cent may be feasible. He thinks it will be closer to 20 than to 30 per cent. At 30-40 per cent, the cost of the grid start sky rocketing. A share of 50 per cent will be practically impossible. And then again, he adds in a recorded conversation with Rod Adams that is published on atomicinsights.com, it doesn’t really matter whether it will be 20, 30, 40 or 50 per cent. You are still going to need 50, 60, 70 or 80 per cent of your electricity being produced by another source. Which in the present world usually means: coal.**)

Throughout this site, you will find encouragements to start using your calculator. On this page of the Energy Reality Project (opens in a new window) you find an excellent example of such a calculation. It simply calculates how much it would cost to replace a 500 MW nuclear powerplant, if you would want that same reliable 500 MW baseload power produced by wind power.

This is why some pro-nuclear advocates get angry when they hear any suggestion that we ‘can live on renewables’. To continue saying that, and exclude nuclear energy as an option, is seen as simply supportive of the continuation of burning vast amounts of coal. To demonstrate that I use the word ‘angry’ not a manner of speaking, I have posted the following video. It’s shot by Gordon McDowell, former campaigner of the Canedian Green Party. He interviews John Kutch, a technically very well informed pro-nuclear campaigner. At around 4:54 Gordon intervenes, asking John not to get angry again, it may not be favourable to the message. But John, well, he’s simply pissed. The emotion is 100% authentic. You may not want to watch this if you think we can solve our carbon problem with solar, wind and energy conservation. The woman displayed in the frame, by the way, is Helen Caldicott, who states we just may have to do without electricity, as “Mozart and Shakespeare wrote their great works by candlelight.” Kinda cute, if it were not true that many people ‘reason’ along similar lines.To John Kutch, Helen Caldicott is the ultimate evil. Watch and shiver…

Ben Heard on the other hand, takes a more pragmatic position. Speaking for South Australia he sees solar panels as a handy buffer as they offer maximum production conveniently at the same time when everyone switches on their air conditioning. “And besides”, he states in the interview mentioned above, “wind and solar are not going to get away.”

And I agree – I don’t think it’s a good idea to chase the solar loving community ‘into the curtains’ – as the Dutch saying goes. To my friend Ruben, a nice, hard working guy who’s making a living out of installing solar pannels on roofs here in the Netherlands, I’d say: just get on with it. There’s room in the market and there’s still plenty of room on Dutch roofs.

It’s simply inevitable that wind and solar will be playing a role in providing clean energy – up to a degree. But we will be needing a complementary source, and if this is not provided by molten salt reactors, it will be provided by the carbon industry. To neglect this need for a complementary source is a big support for a further growth in worldwide use of gas, oil and coal.

Ross Koningstein and David Fork where project leaders of one of the most ambitious and well funded efforts ever taken to develop renewable energy: Google’s RE<C Program, that started in 2007. In 2011, the company decided that RE<C was not on track to meet its target and shut down the initiative. Koningstein and Fork report: “The two of us, who worked as engineers on the internal RE<C projects, were then forced to reexamine our assumptions. At the start of RE<C, we had shared the attitude of many stalwart environmentalists: We felt that with steady improvements to today’s renewable energy technologies, our society could stave off catastrophic climate change. We now know that to be a false hope—but that doesn’t mean the planet is doomed.”

Bill Gates has given his opinion that today’s renewable-energy technologies aren’t a viable solution for reducing CO2 levels, and governments should divert their green subsidies into R&D aimed at better answers.

Roger Andrews, co-blogger on the website of Euan Mearns, is one of the people who took up the challenge of David Mackay, to come up with a plan ‘that adds up’. Roger extensively researched various combinations of renewables. Recently, he summed up the findings that he published in about 20 posts. He starts by clarifying his position: “I’m not anti-renewables, as I think the 2.25kW PV array and solar water heater panels up there on my roof demonstrate. None of my posts was motivated by a burning desire to prove that renewables wouldn’t work.” Yet his main conclusion is that “The renewable energy transition as presently conceived will gradually grind to a halt simply because it can’t be done.”

*) The reader may have to go through some mental excercise to get a grasp on what ‘one Germany’ really implies. In an article of March 2013 on Brave New Climate, Barry Brook paints the picture for Australia, a country of which many would say ‘it has plenty of desert space for PV-panels’. Brooke discusses a WWF report the proposes that Australia get 100% of their electricity from PV panels. Brook point out that electricity, in the case of Australia, is only 18% of the country’s total energy needs. And for this 18%, estimated 1% of land space would be needed. Brook shows what that would really mean: 1% of Australia. He makes it quite clear that ‘ten Germany’s’ are not to be taken lightly.

**) In the United States, many coal plant now get closed and are replaced by power plants that run on natural gas – shale gas production now supplies the US with vast amounts of cheap gas. Electricity from natural gas produces less carbon dioxide, but still does produce it. Due to all this cheap gas, Europe now gets even cheaper coal.